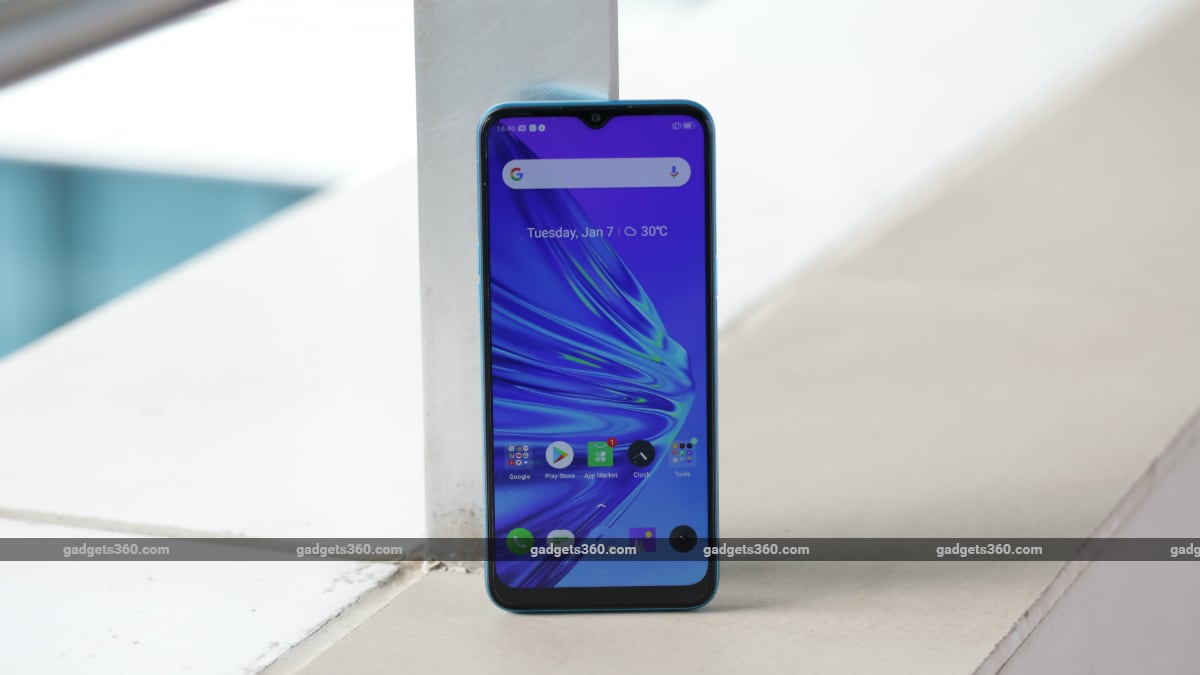 Realme 5i is a watered-down version of the Realme 5

HIGHLIGHTS
JUMP TO
IN THIS ARTICLE

Realme 5i has been launched in India, with the Oppo spin-off brand live streaming the launch on Thursday. The new Realme phone is a watered-down version of the Realme 5 that debuted in the country last August. The Chinese company brought the Realme 5i in Vietnam earlier this week that detailed its design and specifications ahead of the India launch. Key highlights of the Realme 5i include a quad rear camera and a 5,000mAh battery. The Realme smartphone also comes with a waterdrop-style display notch and features a fingerprint sensor at the back. There is also a splash resistance. Realme aims to take on the likes of the Redmi Note 8 and Samsung Galaxy M20 with the Realme 5i. In addition to the Realme 5i, Realme has announced its Classic Blue Limited Collection that includes a 10,000mAh Realme Power Bank and Realme Buds Air case with a blue paintjob. The company has also teased its anticipated fitness-tracking wristband that could debut as the Realme Fitness Band.

The Realme 5i price in India is set at Rs. 8,999 for the single, 4GB RAM + 64GB storage variant. The smartphone comes in Aqua Blue and Forest Green colour options and will go on sale starting Wednesday, January 15. Moreover, the phone will be available for purchase during its first sale at 12pm (noon) IST on Wednesday through Flipkart and Realme.com website.

Launch offers on the Realme 5i include benefits worth Rs. 7,550 for Jio users as well as a 10 percent SuperCash via MobiKwik. Customers will also receive additional exchange discount via Cashify.

The dual-SIM (Nano) Realme 5i runs Android 9 Pie with ColorOS 6.1 on top and features a 6.52-inch HD+ (720×1600 pixels) in-cell display with 20:9 aspect ratio and 269ppi of pixel density. The display panel is also protected by a 2.5D curved Corning Gorilla Glass 3 protection. Under the hood, the phone has the octa-core Qualcomm Snapdragon 665 SoC, paired with 4GB of LPDDR4X RAM.

For photos and videos, the Realme 5i has the quad rear camera setup that includes a 12-megapixel primary sensor along with an f/1.8 lens. It is assisted by an 8-megapixel sensor that has a wide-angle f/2.25 lens, paired with two 2-megapixel sensors that have f/2.4 portrait and macro lenses on top. The smartphone also has an LED flash. For selfies, there is an 8-megapixel camera sensor at the front along with an f/2.0 lens. The smartphone also has a list of pr

Realme 5i is a watered-down version of the Realme 5 HIGHLIGHTS Realme 5i is powered by Qualcomm Snapdragon 665 SoC...