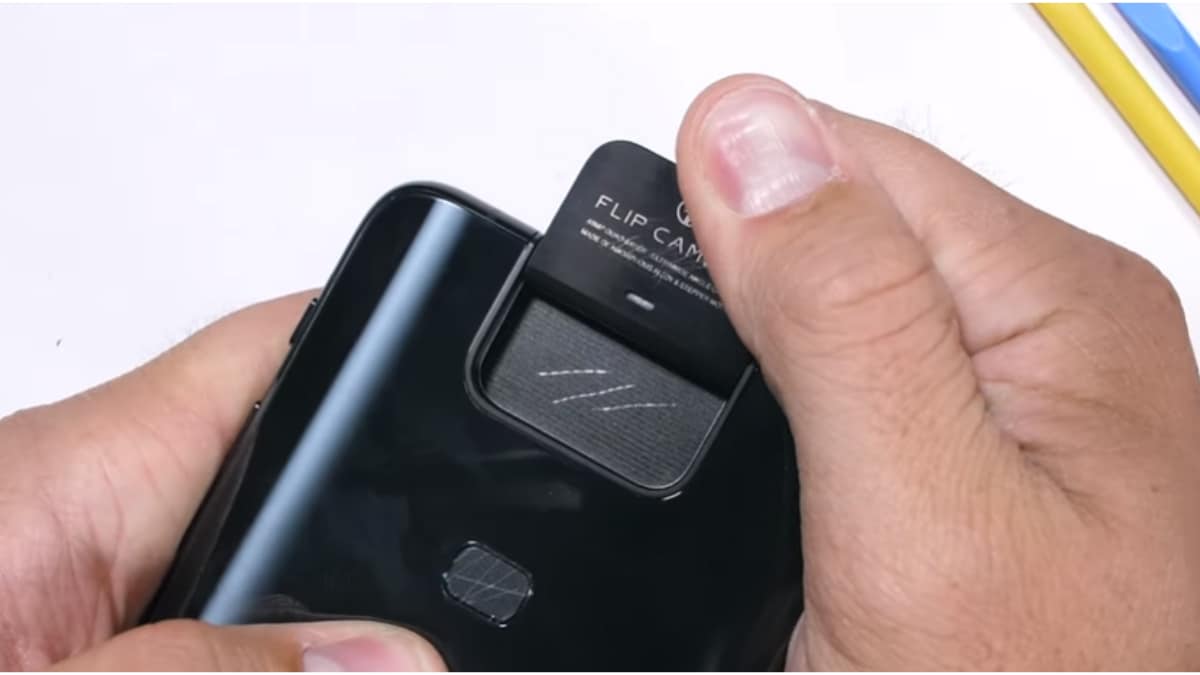 The Asus ZenFone 6 was launched last month, and JerryRigEverything has finally got around in doing his slew of durability tests on the phone. The ZenFone 6 was launched in India as the Asus 6Z yesterday. He particularly focuses on the motorised flip camera that houses two sensors, and the series of tests conclude that the flip camera is quite sturdy, with the hinge material quite strong. – the company is touting the use of ‘liquid metal’ to strengthen the build. The camera also has the same auto-retracting capability when it senses a fall, just like the OnePlus 7 Pro. The Asus ZenFone 6 also aces the bend test, surviving without any cracks or damages on the front or back of the phone.

JerryRigEverything’s latest video focuses on the Asus ZenFone 6 aka Asus 6Z, and the big focus is kept on the Flip Camera. The phone’s camera is put through a series of uncomfortable hurdles, and it seems to pass through all with no damage. YouTuber Zack Nelson manually obstructs the camera from flipping midway, bangs it on the table while open, tries to flip it manually, and even tries to force it out of the hinge that causes it to flip easily. The phone survives all of these tests, and the flip camera continues to work smoothly even at the end of the video.

Coming to the scratch test, the Asus ZenFone 6 manages to scratch at Moh level 6 – with deeper grooves at Moh level 7. The sides, the manual buttons on the edges, and the fingerprint sensor are all made of metal and scratch easily. The fingerprint scanner continues to work fine even after suffering scratches. The camera module also is made of metal, and suffers scratches easily. There are some sparks that are seen to be flying while scratching the top portion of the Flip Camera module, which is a bit weird, but the cause of it is not detailed in the video. The camera module cavity is also made of metal and scratches easily.

The phone suffers damage of pixels after 8 seconds of flame, but it almost immediately starts recovering as soon as the flame is turned off, and no visible damage is seen on the phone at the end. The phone also passes the bend test with flying colours, with no damages on the display or the back panel.