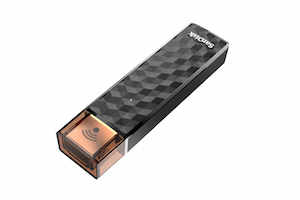 The Stick is capable of supporting a single stream for up to 4.5 hours on a single charge.
NEW DELHI: Flash storage solutions company SanDisk has launched a new wireless mobile flash drive, SanDisk Connect Wireless Stick in India.

As per the company, the new drive enables easy sharing, transferring and accessing of photos and videos between mobile devices and computers.

The SanDisk Connect Wireless Stick features higher capacity, up to 128GB, a new app, and compact design.It will initially be available at Flipkart and then extended to other channels in a phased manner by end of December 2015.

The SanDisk Connect Wireless Stick works with smartphones, tablets and computers and allows users to wirelessly access media or transfer large files; save and share photos and videos; or stream HD videos and music to and from mobile devices – up to three at a time. The Stick is capable of supporting a single stream for up to 4.5 hours on a single charge. With its USB connector, users can also connect directly to a computer to save and transfer files instantly.

The SanDisk Connect Wireless Stick features an app, the SanDisk Connect app, which enables management of content between users’ devices including, iOS and Android devices; Amazon’s Kindle Fire tablets; and Macs and PCs via password-protected Wi-Fi connectivity. Available for download through the App Store, Google Play Store and Amazon Appstore for Android, the new app also enables other features like auto-back up of photos and videos from the camera roll to the drive.